“Forensic studies of the body indicated that Samuel had probably been murdered in early September”.

“Traces found in the garage suggested that the body had been stored there for 2 months before being buried”.

The Home Office Pathologist was unable to determine either the cause of my father’s death, or the date of his death. The prosecution instead relied upon circumstantial evidence to support their theory that he died in September 2009, to coincide with my moving out of the area. A number of assumptions had to be made to sustain their case:

A forensic scientist specialising in entomology was briefed on this basis. He relied upon this information when analysing fly pupae found on the body and in the garage. He was given the temperature recorded in the garage and compared this to meteorological data:

In his original view, my father could only have been “buried after exposure for a minimum of two months”. However, when cross-examined, he conceded that there were “innumerable complexities to such an estimate” and that he had been “forced to work with a number of assumptions”:

“I have made the assumption that the body was in the garage for that period of time… If that assumption was wrong, my estimate of when the body was last alive would be wrong” – Entomologist

He explained that his timing required specific temperatures and conditions to be maintained without fluctuation or change:

“Factors that can delay egg laying include poor weather conditions, being indoors etc. The rate at which growth occurs depends on a number of factors, including ambient temperature” – Entomologist

Any variation in these conditions would throw the prosecution’s timeline out completely.

Indeed, the Home Office Pathologist admitted that my father “could have been alive in mid-October, the evidence is not inconsistent”. His superior, a Consultant Forensic Pathologist, added that: “it is entirely plausible that the deceased could have still been alive in October”.

Nevertheless, the prosecution put great store upon the entomologist’s evidence and insisted that he had made the right assumptions. They argued that I couldn’t possibly have seen my father alive in October because he would have been long dead by then. The jury did not have available to them evidence of potential independent sightings of my father over that period, nor were they asked to consider whether it was physically possible for someone to carry out the burial in 3 hours – the amount of time I was actually there for in November – one and a half hours of which I had spent taking delivery of the fourth layer of concrete.

My father’s body couldn’t possibly have been left in the garage for 2 months. Tell-tale staining and odours were completely absent, and there were notable differences between the species of fly pupae found in the garage and those found on the body. Indeed, the amount of pupae apparent in the garage just didn’t match the levels one would expect for this sort of thing. 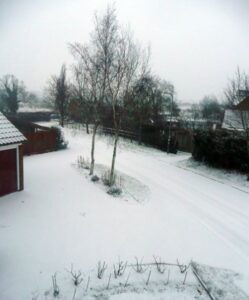 Our garage was situated at the top of the street, overlooking a public footpath. You’ll remember from the evidence I shared with you on the odour issue that nobody passing by our house – be they joggers or postmen – ever noticed any unpleasant smells.

If the entomologist’s evidence is unreliable or wrong, then the prosecution’s timeline is unreliable or wrong, and their case falls apart. The lack of any forensic evidence suggesting that the murder, fire, or substantial decomposition ever took place at the family home; the absence of any signs of a disturbance, or struggle; and the existence of fractures consistent with transportation of the body; all point towards the murder and subsequent storage of my father’s body having taken place at an alternative, as yet unknown, location.

“All tests [around the house, between floorboards] were negative” – Police Support Scenes of Crime Officer

Despite this, the police made no efforts to search for evidence beyond the house.

Back to: 10 things the Daily Mail got wrong about the trial of Mark Alexander or move on to: Mistake #5